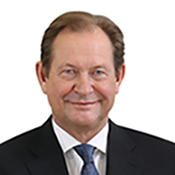 Inge has been a board member since August 2019.

He is a Director of the boards of Merck & Company, the Swedish American Chamber of Commerce in New York and World Childhood Foundation as well as on the Advisory board of New Economics Forum.

Prior board assignments are: 3M, The Greater Twin Cities United Way Campaign (Chairman), Chevron Corporation and The Toro Company (Director).

Inge holds a degree in economics and marketing from the University of Gothenburg.